What is this? It took me three months to sew my first skirt (a simple A-line) this summer/fall, and now Iâ€™ve finished three in a week?

This is the first time Iâ€™ve sewn a brocade, and the fabric was wigglier than I expected. I used a scrap of coordinating poly-satin for the facing, and, since I have sewn satin before, I should have known better. Itâ€™s like trying to tattoo a live fish. Luckily, all of the wonky bits are hidden on the inside of the garment.

More after the break… 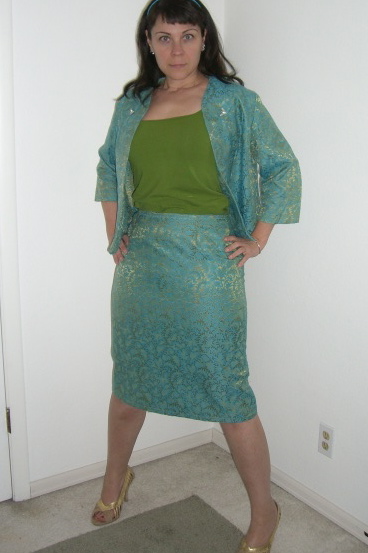 Apologies for pairing a grass-green tank with this suit. It was what I had on while sewing, and youâ€™re lucky I donâ€™t have pajama pants rolled up underneath the skirt.

I neglected to take a â€œbeforeâ€ photo, so youâ€™ll have to trust me that the skirt was a large, boxy, elastic-waist, pull-on number. I originally planned on keeping most of the original structure, and simply adding darts and a zipper, but I wound up deconstructing the whole thing and using the pattern for View D of Simplicity 5259 (best $1.99 I ever spent), adding an inch or so at the bottom, because the skirt was that long to start with and I wanted to keep the intent of the original. Besides, I like my skirts to just cover my knees.

For any new readers who didnâ€™t see this post: No, I didnâ€™t sew the jacket, and I donâ€™t have a pattern for it. This project is a vintage suit that needed some reworking to be fashionably functional.

6 Replies to “Iâ€™ve been replaced by a Pod Person”

Everything tomato tart, inspired by @pastrywithjenn. Most notable change: baked -after- adding the tomatoes because my dearest is allergic to them uncooked. I happily sacrificed and ate the raw tomato bottoms while waiting for this to cook.
(Posting a day behind) Favorite new act of #vlv24: The Fantastic Guillermo Y Los Pistoleros
With one of our BLP Musketeers missing, we missed the big reveal of our annual themed skirts. Here are the “best” detail photos I could scramble up. #vlv24
The traditional drinks-before-noon-at-Frankie’s outing.
A little night music. @ceclendening giving Jittery Jack a vocal break.
@feddriveryo ‘s favorite tiki drink: anything, as long as it’s on fire
The shoulders on this top REFUSE to do the same thing. One up, one down, no agreement. At least @feddriveryo looks good! #vlv24
To friends from distant places! #vlv24
FYI: @laurenrennells’ Rockin’ Rollers are airport x-ray safe! No metal! I mean, they’re totally metal 🤘, but they don’t CONTAIN metal. 🤣