Mr. Blandings Builds His Dream House is not my favorite movie. It’s not included in my admittedly small personal library. But there is one scene which, due in no small part to the nature of my “day job,” is very near and dear to my heart.

Jim Blandings, feeling the constraits of a small, New York City apartment on his growing young family, decides to move them all to a more spacious spread in rural Connecticut. Jim’s wife, Muriel, is in charge of the decorating.

In my favorite scene, Muriel Blandings is discussing with the painter her color choices for the walls, as workers scurry about in the background. This is the dialog between Mrs. Blandings, the painting contractor, Mr. PeDelford, and his painter, Charlie:

Mrs. Blandings – I had some samples. Here we are. Now, first, the living room. I want it to be a soft green. Not as blue-green as a robinâ€™s egg.

Mrs. Blandings – But not as yellow-green as daffodil buds. Now, the only sample I could get is a little too yellow. But donâ€™t let whoever does it get it too blue.

Mrs. Blandings – It should be a sort of grayish yellow-green. Now the dining room, Iâ€™d like yellow. Not just yellow. A very gay yellow. Something bright and sunshiny. I tell you, if youâ€™ll send one of your workmen to the grocer for a pound of their best butter and match that exactly, you canâ€™t go wrong.

This is the paper weâ€™ll use in the hall. Itâ€™s flowered. But I donâ€™t want the ceiling to match any colors of the flowers. There are some little dots in the background, and itâ€™s these dots I want you to match. Not the little greenish dot near the hollyhock leaf, but the little bluish dot between the rosebud and the delphinium blossom. Is that clear? Now, the kitchenâ€™s to be white. Not a cold, antiseptic, hospital white.

Mrs. Blandings – A little warmer, but still, not to suggest any other color but white. Now, for the powder room in here, I want you to match this thread. And donâ€™t lose it. Itâ€™s the only spool I have and I had an awful time finding it. As you can see, itâ€™s practically an apple red. Somewhere between a healthy Winesap and an unripened Jonathan. Oh, excuse me. (leaves to speak to another contractor)

Mr. PeDelford – You got that, Charlie?

On every one of the press checks I go to, it’s my job to KNOW color. I have been playing with Color-Aid swatches and Pantone books since I was a toddler. So, when I order a RED dress from eBay and it shows up RUBY, don’t think I won’t say something. When my beautiful, Stealth Gray Pearl car is repainted some custom mix that a lazy painter thought would be close enough… it isn’t. When my Persimmon and Periwinkle tattoo comes out Persimmon and Blue, I’m going to bitch about it. The differences might be subtle to most people, but to me, it’s like night and day. This isn’t to say that I’m GOOD at color. If I don’t have my swatch in front of me, it can be a nightmare for me to match it. Some folks have a real knack for putting a color to memory, but I’m the sort who is STILL trying to find “the right pink” to match a dress I bought a year ago. And while, in many cases, “close enough” is, it isn’t where that dress is concerned. In this case, I’m trying to learn a lesson oft repeated to me by my friend Mary Jo: “It doesn’t have to match, it just has to go.” (Meanwhile, people stop me on the street when I’m “daring” enough to wear yellow shoes with an all black-and-white outfit.)

So, what goes with this lovely new vintage number that I brought home, again at half-price, from the thrift store yesterday? It’s what I’d call a Sky Blue; not as green as a Robin’s Eggâ€¦ 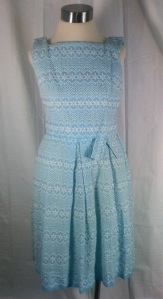 As usual, more info if you follow the link.